Minecraft Earth AR Mobile Game Shutting Down on June 30: All You Need to Know

The Minecraft Earth AR mobile game that Microsoft launched two years ago is closing. The developers say that the current global situation prevents free movement and collaborative games-these are two things that are essential to playing Minecraft Earth. Because of this pandemic, Microsoft made the difficult decision to end support for Minecraft Earth and reallocate resources to “other resources that provide value to the Minecraft community.” The company also released the latest version of Minecraft, which reduces the in-app cost of buying rubies and other perks. 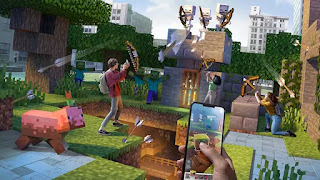 Microsoft announced on the Minecraft blog that it will end support for Minecraft Earth. The company said it will stop providing all content and service support for the game on June 30. This means that users will not be able to download or play Minecraft Earth after that date. The next day, July 1, Microsoft will delete the Minecraft Earth player data that has nothing to do with Character Creator and Mine coin rights.
For all ace players with a ruby ​​balance, they will receive Mine coins, which can be purchased from the Minecraft market. The game maker explained in its blog: “All players with a ruby ​​balance will get Mine coins. You can buy skins and texture packs, maps, and even mini games on the Minecraft store market. Also, if you have ever been in Minecraft Earth If you make a purchase, you will get a free copy of Minecraft (Bedrock Edition), so you can get a fresh start when you snap up some merchandise from the Marketplace
Minecraft Earth was released in May 2019, and Indian users gained access for the first time in November of the same year. As for the new update, and the last update released with it, it eliminates real currency transactions, reduces the cost of rubies, and also reduces the time requirements for crafting and smelting. This update replaces the same level of radius boosts with unused manual and smelting boosts, and hopes to grant a set of Character Creator items to players who log in between January 5 and June 30.